Ubiquity is a fullstack php framework. Ubiquity is fast, has cool features, and is especially adapted to asynchronous platforms (Swoole, Workerman, Roadrunner).

Based on the "Frameworks" category.
Alternatively, view Ubiquity alternatives based on common mentions on social networks and blogs.

Do you think we are missing an alternative of Ubiquity or a related project?

Ubiquity, a powerful and fast framework for efficient design.

If Ubiquity devtools are already globally installed, and you want to upgrade to the lastest stable version:

For an existing project (in the root folder):

The easiest way to create a project is to use composer create-project command:

Creation of the project firstProject

This installation adds devtools and webtools to the project.

It is also possible to install devtools globally, to share their use between different projects, and to get more options for a project creation.

In the PHP world

The various results of the Techempower benchmarks show this conclusively. 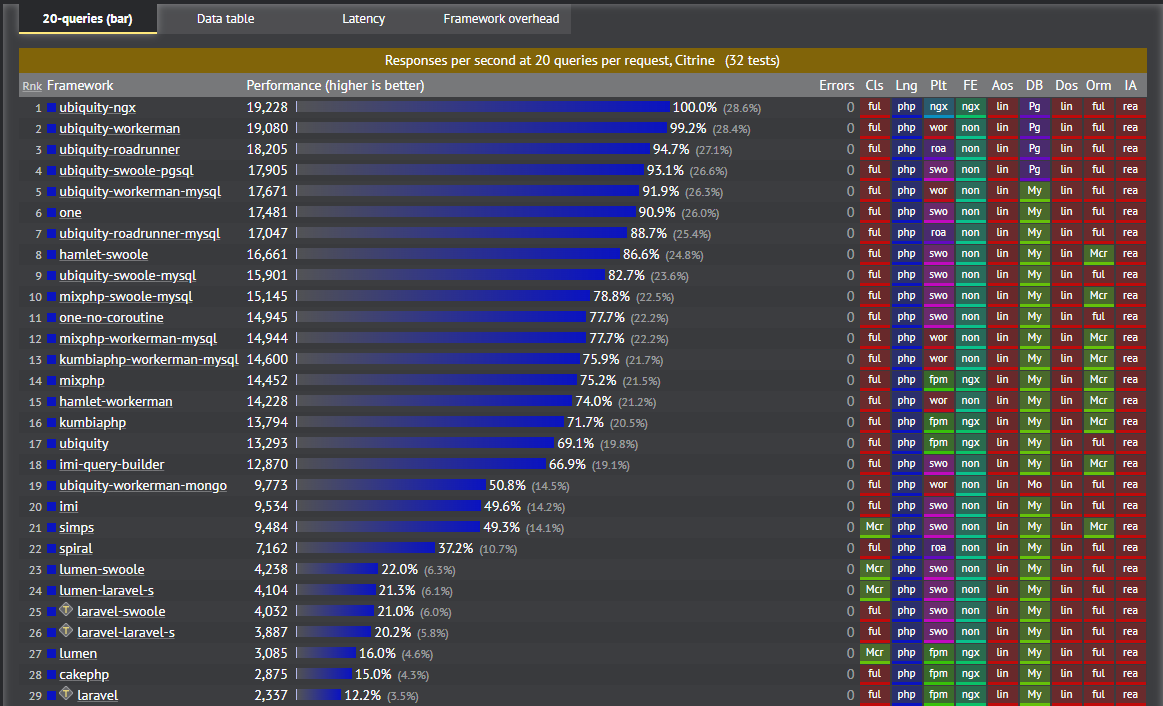 These excellent results have also been confirmed by an independent benchmark site : phpbenchmarks.com

In the world of web frameworks

Ubiquity is optimized for use with asynchronous platforms (Workerman and Swoole). It takes advantage of the recent PHP evolutions (opCache management and preloading). In this context, it performs against the fastest Frameworks written in C, C++, Rust or java:

(*) Only tests with Framework and ORM are considered.

Ubiquity was created in April 2017.

The project tries to simplify the development process, and empowers web developers who delivering value through their applications. It aims to combine performance and ease of handling.

This dual purpose has led to some design choices:

Get inspired by the best practices and successful concepts from other frameworks, but do not try to reproduce things that are not a part of the logic of PHP.

Some PHP frameworks were inspired by the Java world, which has contributed to more professional php development. But java is not PHP : the environments and languages are completely different (though their syntax is similar). What is good in Java is not necessarily in PHP.

Ubiquity wants to keep the essence of PHP and what it does best, for example:

Overall, Ubiquity wants to keep and use what PHP is good at.

In this perspective, Ubiquity chooses not to respect certain standards: For example, by not creating a Response object implementing an interface (see PSR-7 HTTP message interfaces ) in response to an Http request.

Not multiplying the ways of doing things.

If a method or technique is optimal, there's no reason to implement an alternative version, especially if there is a risk of degrading the performance or complicating the handling of the framework.

Avoiding multiple external dependencies, which are sometimes loaded when they are never used.

The framework used must give the developer the means to optimize his application and not the other way around.

Preview of some features

The console mode makes it easy to perform all the repetitive tasks related to the design of projects:

Generation of the CRUD elements for a model class with devtools :

Like the console, the administration interface makes it possible to act on the main components of the framework.

When creating a project, it can be installed with the -a option.

You can tell us your pleasure in using Ubiquity, giving us a star, and you can do even better by contributing...


*Note that all licence references and agreements mentioned in the Ubiquity README section above are relevant to that project's source code only.